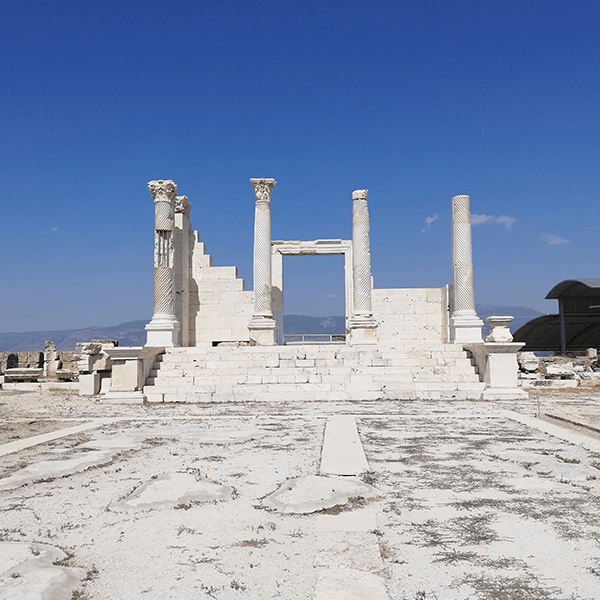 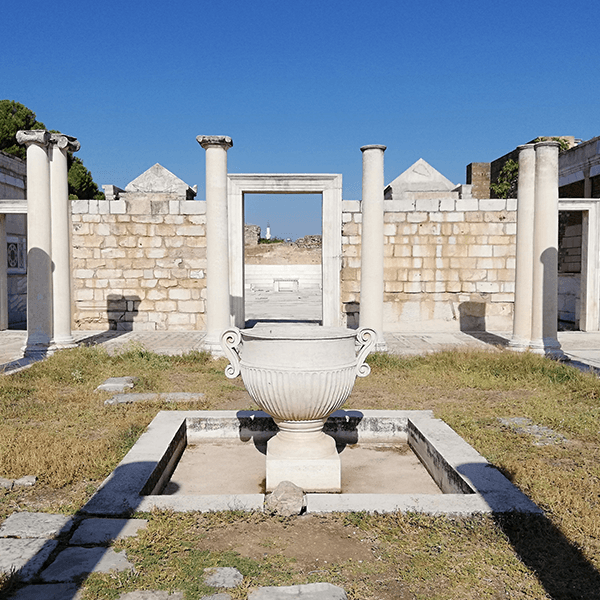 7 Churches of Asia Minor in 8 days

Day 1 : ARRIVAL ISTANBUL
Upon our arrival at Istanbul International Airport. Meet, assist and transfer to hotel. Its original name is Byzantium then Constantinople. It is a most fascinating city, which actually crosses two continents Europe and Asia. It is a city of amalgamation of bazaars, minarets, mosques, churches, palaces, and restaurants catering to every one’s taste, museums, customs and twelve million people. Check into our hotel and overnight.
Day 2 : ISTANBUL (Breakfast)
Discover the Byzantine and Ottoman treasures of Istanbul. We visit St. Sofia, the (church of the sacred wisdom), converted to a mosque from a Christian basilica after the fall of Constantinople in 1453. We see the Hippodrome and the Obelisk brought from Egypt. Then our next visit is the Blue Mosque with its six minarets. Before lunch we will visit the Underground cistern. Continue with the Grand Bazaar. Overnight in Istanbul.
Day 3 : ISTANBUL (Breakfast)
Morning private Bosphorus cruise in Istanbul . After free time in Spice Market lunch near Spice market.
Afternoon we will visit the Topkapi Palace which was the residence of the Ottoman sultans, with its fabulous treasure chambers. Overnight in Istanbul.
Day 4 : ISTANBUL – TROY – CANAKKALE (Breakfast – Dinner)
After breakfast we depart for Gallipoli, through the European lands of Turkey. Cross the Dardanelles Strait by ferry-boat. Lunch en route. Visit ancient Troy, see the legendary walls and the replica of the wooden horse. Drive to Canakkale, that lends its name to the Straits of the Dardanelles (in antiquity it was called Hellespont). This narrow passage connects the waters of the Mediterranean Sea, the Aegean Sea, the Sea of Marmara, and further north opens into the Black Sea, on the southern shores of the former USSR. Check in at the hotel followed by dinner and overnight in Canakkale.
Day 5 : PERGAMON – THYATIRA – IZMIR (Breakfast – Dinner)
After breakfast at our hotel in Canakkale, we drive to Pergamum, actually called Bergama. It is one of the sites of the Seven Churches of Asia [Rev. 1:11; 2:12]. Here we explore the impressive Acropolis, the steepest theatre in the world, the Asklepion, famous medical center of classical times, see the Altar of Zeus which is mentioned as the «Throne of Satan» in the book of Revelation, the marble columns of the Temple of Trajan and the Library which was foremost in the world and was long a rival of the equally famous Library of Alexandria in Egypt. Its wealth of volumes was estimated at over 200,000. It inspired the invention of parchment.
Then we continue our visit to Thyatira, now called Akhisar, another one of the Seven Churches of Asia [Rev. 1:11; 2:18-24; Acts 16:14]. It was a city famous for purple dyes. We visit the remains of a basilica and some architectural fragments from the Roman period. Lydia, the seller of purple in Philippi, was from Thyatira.
Before we check in at the hotel in Izmir, we enjoy a panoramic ride of Smyrna, the third largest city in Turkey and one of the sites of the Seven Churches of Asia [Rev. 2:12-17]. Smyrna is a city scarred with a bloody history of trade and warfare. We will also see the Clock Tower. Check in at the hotel for dinner and overnight in Izmir.

Day 6 : Izmir – Sardis – Philadelphia – Laodicea – Hierapolis (Breakfast - Dinner)
Today we depart early in the morning to one of the most picturesque areas of any of the Seven Churches of Asia [Rev. 1:11; 3:1-4], Sardis, presently Sart. This was the capital of the ancient Lydian kingdom of the 6th century BC, portrayed as a dying church. We visit the great Temple of Artemis and restored gymnasium and reconstructed Synagogue. We also see the last several meters of the royal Persian Road from Susa to Sardis built by Cyrus the Great and the «golden» river Pactolus.

Then we continue our journey to Philadelphia, nowadays called Alasehir, another church of the Seven Churches of Asia [Rev. 1:11; 3:7], and the only church not censured. There we see the remains of a Byzantine basilica built of brick, with a bit of high arch and some 11th century frescoes. Continue to visit to Laodicia. The city established in the C3 BCE by the Seleucid Antiochus II, the city was named after his wife Laodicea. Built on the Lycus Tributary of the Meander River, it was surnamed Laodicea on Lycus, to distinguish it from other similarly named cities. Laodicia is the last of the seven churches. As a crossroad of two important roads, this city had an important commercial and logistical position. We drive to the healing city of Hierapolis, actually Pamukkale, the white «cotton fortress» where hot mineral water bursts from the earth and cascades over steep cliffs forming pools, channels and stalactites. The therapeutic waters were known to the founders of Hierapolis and of Laodicea in 190 BC. Check in at hotel for dinner and overnight in a Thermal Hotel.

Day 7 : Ephesus – Kusadasi (Breakfast - Dinner)
Drive to Ephesus visit to the ancient city of Ephesus including the Basilica of St. John. The Apostle Paul preached to the Ephesians and lived here for three years. This church also received an epistle from him. We tour the spectacular ruins where excavations still continue in this once great and important city, which was founded in the 10th century BC.

Walk through history along marble streets lined with wonderful public buildings, among them the Baths of Scholastica, the Library of Celsus, the Temple of Hadrian and the Theatre. The Temple of Diana of the Ephesians, another of the seven wonders of the ancient world, was built in this city. We visit the Basilica of St. John. Visit The House of Virgin Mary before drive to Kusadasi. Overnight in Kusadasi.

Day 8 : IZMIR – ISTANBUL – HOME (B)
Pick up from hotel and transfer to Izmir airport for flight back home. 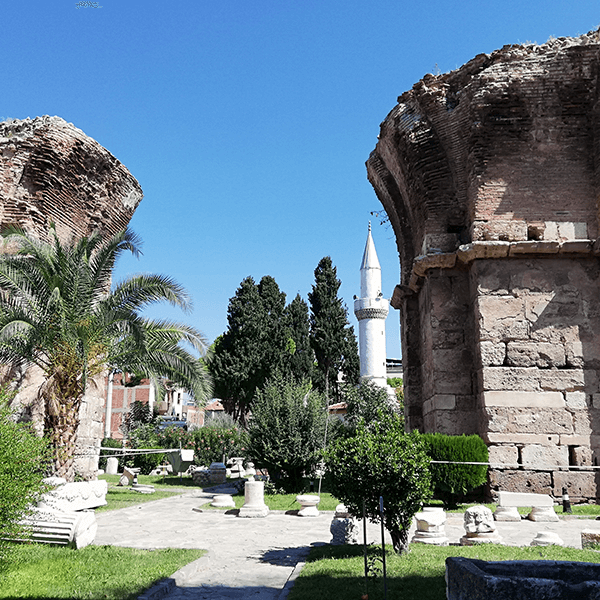 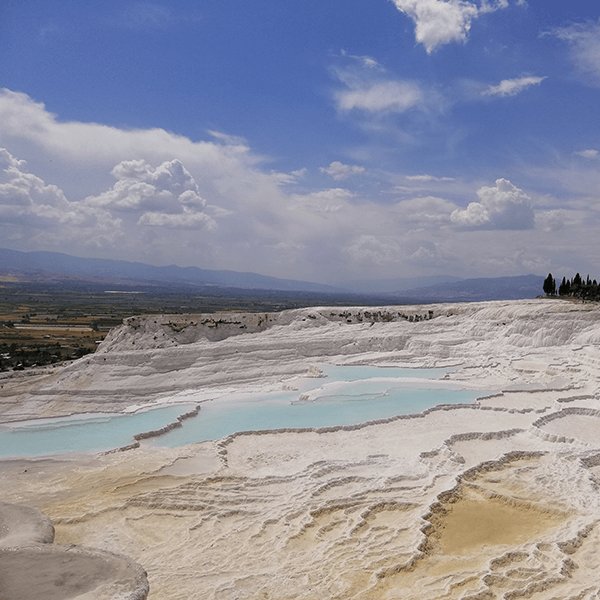 7 Churches with Istanbul and Cappadocia